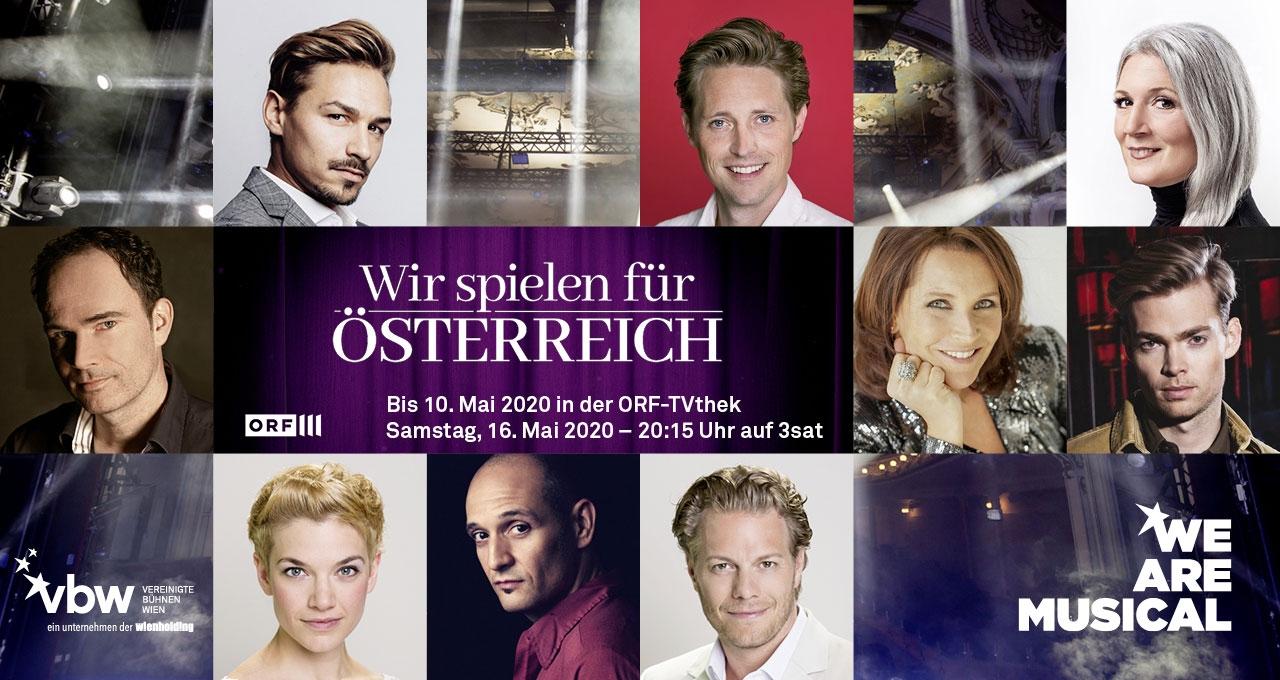 During this currently very difficult time, in which all theaters have to remain closed, the Vereinigte Bühnen Wien want to make a cultural contribution and bring the most emotional musical moments home to the audience.

The audience favorites Thomas Borchert, Carin Filipčić, Maya Hakvoort, Dominik Hees, Milica Jovanović, Oedo Kuipers, Lukas Perman, Drew Sarich and Mark Seibert presented the most beautiful songs from VBW's own productions ELISABETH, DANCE OF THE VAMPIRES, SCHIKANEDER, THE VISIT, I AM FROM AUSTRIA, DON CAMILLO & PEPPONE, MOZART !, REBECCA and from the current CATS production live from the large broadcasting hall in the ORF RadioKulturhaus and via video playback. The program is a foray through the most popular musicals of the United Theaters in Vienna, which generate enthusiasm among audiences both in Vienna and internationally. Worldwide, more than 27.5 million people have seen a VBW musical. All dates for the organization of the concert took place in compliance with the strictest safety requirements and medical health checks.

Musical evening with VBW musical stars and I AM FROM AUSTRIA

Following the big concert, ORF III showed the VBW hit musical I AM FROM AUSTRIA in the original production from the Raimund Theater by Andreas Gergen with audience favorites such as Iréna Flury, Lukas Perman, Elisabeth Engstler, Andreas Steppan, Dolores Schmidinger or Martin Bermoser in the main roles. The musical by Titus Hoffmann and Christian Struppeck with the greatest hits by Rainhard Fendrich has won the hearts of the audience since its world premiere in September 2017. After two almost sold-out seasons in Vienna, the production celebrated the celebrated first tour in Japan in October 2019 and, after two series of shows in Takarazuka / Osaka and Tokyo, which were also sold out, counted three-quarters of a million visitors worldwide.

Video on demand and Fidelio

The concert „Wir spielen für Österreich“ can still be seen as video on demand via 3sat-TVhek until May 23, 2020.

Then concert will be also available in "fidelio", an audio-visual streaming platform from ORF and Unitel. (Interested users have the possibility to receive a 14 day free trial without any commitments)

GET YOUR TICKETS NOW!

The world success finally back in Vienna