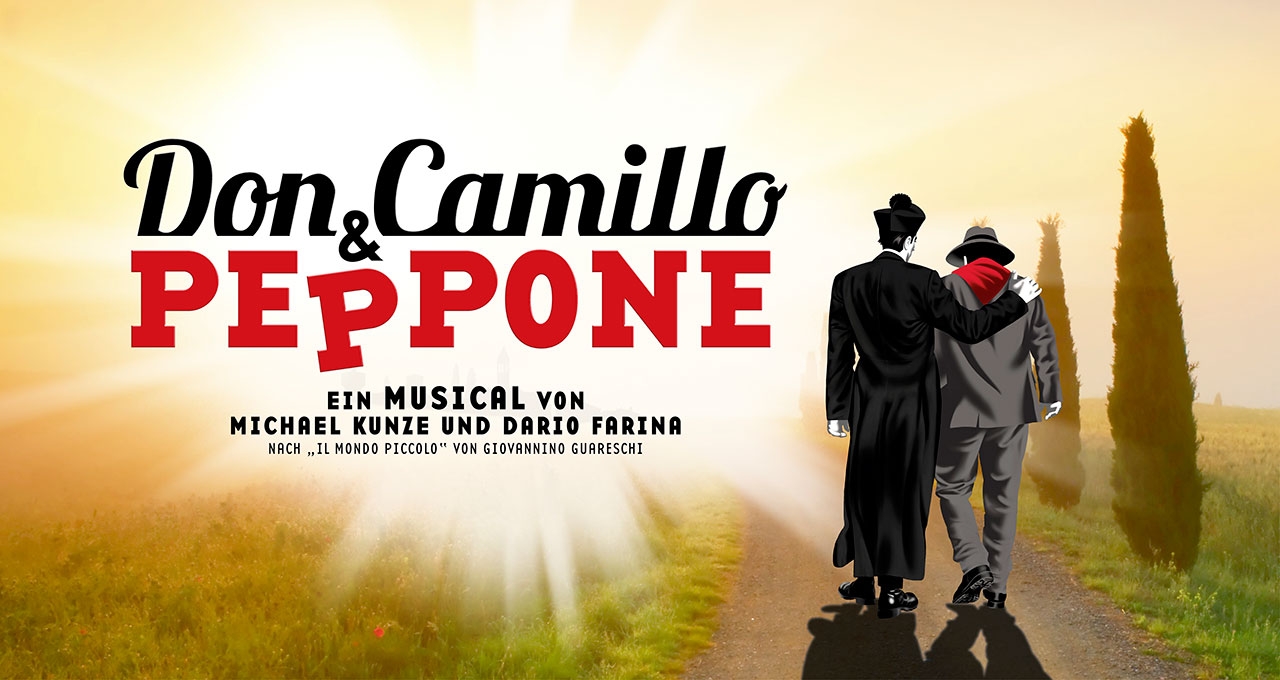 DON CAMILLO & PEPPONE celebrated his Austrian premiere at 27. January 2017 at the Ronacher! Their stories are well-known from the legendary film versions of Giovannino Guareschi’s “Mondo Piccolo” novels. The VBW developed the world premiere stage production of this literary classic as a co-production with the Theater St. Gallen (world premiere 30 April 2016 in Switzerland).

DON CAMILLO & PEPPONE lovingly recreates the tales centred on the pugnacious Catholic priest Don Camillo and his no less bellicose antagonist Peppone as a joyous, light-hearted musical. It provides a reunion with charming, much-loved characters in an upbeat tale set in rural Italy in the 1950s, a tale of social optimism, mutual co-existence, tolerance and the power of reconciliation.

A literary classic brought to the stage by international creatives

The musical’s book and lyrics are by Michael Kunze, the German language’s premier writer and translator of musicals, books and lyrics, whose works have so far been honoured by 79 gold and platinum records. The composer is Dario Farina – familiar to many from his cult pop songs like “Felicità” and his highly respected film scores (“Rossini”) -  and together they have created an entertaining, fun piece of musical theatre, imbued by the composer with Mediterranean flair and romance. The musical supervision and orchestration are by the VBW’s Musical Director Koen Schoots.

The director is Andreas Gergen, Opera Director of the Salzburger Landestheater, who has directed more than 75 operas, operettas and musicals internationally (“Carmen” / Salzburger Felsenreitschule, “La Traviata” / Haus für Mozart, Salzburg, THE VISIT), including numerous world premieres. The choreography is by Dennis Callahan (MOZART!, ELISABETH, DANCE OF THE VAMPIRES), the set design by Peter J. Davison, who has worked on dance, drama, opera and musical productions all over the world (REBECCA, THE VISIT). The costumes are by Yan Tax (MOZART!, ELISABETH), while Michael Grundner (LES MISERABLES, JESUS CHRIST SUPERSTAR) created the lighting design and Thomas Strebel (MOZART!, THE VISIT) is behind the sound design.

Don Camillo, Boscaccio’s village priest, is outraged. He gazes reproachfully up at the cross. “How could you let this happen?” Jesus replies that this is what democracy is about. After all, the poor have plenty of reasons for voting in a Communist mayor.

So begins our light-hearted musical about the Catholic priest Don Camillo and his rival Peppone, the new mayor of Boscaccio. It is 1947 and we find ourselves in a village in the North Italian Po Valley. This apparently sleepy little village is the setting for a battle between traditional values and the ideals of a social revolution. Not even Jesus can calm the furious priest down. In the war that has just ended, Don Camillo, unlike other clerics, fought with the partisans against the Fascists. Now he must fight against Peppone and his comrades. If necessary using the gun he has hidden in the sacristy.

The new mayor is no stranger to Don Camillo. They fought side by side when they were both part of the resistance to the now-toppled dictatorship. But Don Camillo vehemently rejects Peppone’s political views. His opponent’s attitude is equally vehement. Peppone sees himself as the representative of a new and better era. He is fighting for a better world, even if the Communist Party slogans he spouts sound odd coming from this man of the people. He considers the Church a force for evil, holding back progress.

These are our two combatants: the one cunning and eloquent, the other stubborn and intransigent. On Don Camillo’s side are the wealthy landowners and conservative churchgoers, while the poor labourers and progressive intelligentsia stand behind Peppone. Each side despises the other and this contempt not infrequently turns into burning hatred.

As long as it is confined to words, ideas and demands, the quarrel sows discord in the village, but nothing worse. But a devastating flood makes it clear that in an emergency they all need each other. When soon afterwards a strike threatens to destroy all the livestock, Don Camillo realises that uncompromising confrontation will plunge the village into calamity.

However, it is a pair of star-crossed young lovers who bring about the real change of heart.  Gina, the daughter of rich landowner Filotti, is in love with Mariolino, the son of Brusco, a poor peasant farmer. As with Romeo and Juliet, their feuding families will go to any lengths to break up the relationship between their children. We all know how it ends in Shakespeare. Here, too, the young couple can see no way out except joint suicide. Fortunately, Don Camillo and Peppone find out in time that the pair intend to drown themselves. They sound the alarm and the whole village forms a search party. The despairing lovers are found just in time. The shock brings everyone to their senses. Boscaccio will never belong completely to either Don Camillo or Peppone. Instead of fighting each other, they will have to come to an understanding and learn to put up with each other.

Gina and Mariolino’s wedding does not resolve every quarrel between the villagers, but it is a festival of tolerance, celebrated in harmony by the entire village.

“DON CAMILLO & PEPPONE, which we developed in cooperation with the Theater St. Gallen, was a world premiere that meets the highest international standards, and we are proud to be bringing this classic to the Viennese musical stage for its Austrian premiere early in 2017.  The show offers a reunion with many much-loved characters – brought to life with warmth and charm by our superb cast – transporting the audience back in time to 1950s rural Italy. The two main characters have become cult figures the world over in numerous literary and cinematic incarnations. Our first-class writing and leading teams breathe fresh life into these beloved characters, who overcome their antithetical beliefs and together find a way to fight inhumanity and intolerance. The result is a wonderful addition to our performance schedule and a magnificent original musical.”

“When Michael Kunze approached me with an idea for a new musical, I was instantly fired up and would have moved heaven and earth to bring this wonderful tale of Don Camillo and Peppone to the stage. I am thrilled that the Theater St.Gallen in cooperation with the VBW has been able to create this new musical. The synergies between the two theatres enabled us to stage a unique musical world premiere at the Theater St.Gallen in April 2016. I now greatly look forward to the Austrian premiere at the Ronacher in Vienna.”

“Our unique working relationship with Michael Kunze, which goes back years, reached a high point in 2013 with the world premiere of the musical “Moses – The Ten Commandments”, and another one with the world premiere of “Don Camillo and Peppone” in April 2016. Dario Farina’s memorable music helped to turn the story into an upbeat, light-hearted musical that transports the audience to 1950s Italy. Our first-class creative team and ensemble will undoubtedly infect Viennese audiences with the same Mediterranean joie de vivre.”

“A few years ago I happened to stumble across a copy of Giovannino Guareschis ‘The Little World of Don Camillo’, a collection of short stories that was filmed in the 1950s under the title ‘Don Camillo und Peppone’. My early childhood memories of the film were mixed with  astonishment at how unexpectedly relevant the book had remained. After all, the Don Camillo stories are about the realisation that fundamentalism of any kind destroys the basis of peaceful coexistence. Using an Italian village as a microcosm allows that theme to be explored light-heartedly. I approached the material with the same loving irony as Guareschi and the same delight in these wonderful characters. As a result, it turned out to be something very different from my earlier musicals, ‘Elisabeth’, ‘Mozart!’, ‘Dance of the Vampires’ und ‘Rebecca’, namely a joyous, carefree musical. The brilliant Dario Farina’s catchy, unpretentious music provides a marvellous Italian flair.”

“When Michael Kunze first approached me with the idea of writing a musical about ‘Don Camillo and Peppone’, I was delighted, because these stories were an important part of my youth. I immediately read ‘Il mondo Piccolo di Don Camillo’ and started composing the music. The show deals with topics like respect, tolerance and friendship, qualities which I feel we have rather lost touch with today. I tried to match the music to the action and location, to give the audience the feeling of being right there in Italy. I am delighted that after many years of preparation we were able to stage the production in cooperation with the Theater St. Gallen and the VBW. We also managed to get a fantastic ensemble together, who will hopefully make the show as much of a success in Vienna as it was in its world premiere run in St Gallen. “

“There could be no better time to stage ‘Don Camillo & Peppone’. Just as the little Italian town of ‘Boscaccio’, where the action is set, finds itself in turmoil following the end of the second World War, so we find ourselves in a time of social upheaval. There is a clash of opposing political and religious beliefs. The show’s message is that the only solution lies in cooperation and coexistence, and this message is conveyed in an exciting, intelligent and highly entertaining way.”

“Resounding applause at the Ronacher”