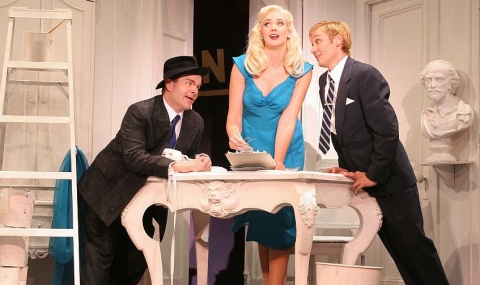 On New York's Broadway in 1959 - Max Bialystock, a windy but recently hapless theater producer and his neurotic, uptight accountant Leo Bloom have the perfect plan. They want to put the worst show ever on stage and land a pre-programmed flop. In an extremely gallant way, Bialystock convinced some well-heeled old girls to take over the financing and promised everyone the entire profit. After a catastrophic flop, however, nobody will expect a payout. Bialystock and Bloom want to get financially secure and start a carefree life in Rio.

With the dreadful work "Spring for Hitler", written by Franz Liebkind, a mocked old Nazi, they believe they have found the worst piece of all time. As a director, they hire the inflated but completely unskilled Roger de Bris and his obviously talentless team. Bialystock and Bloom are sure to win - this will be the most impossible show Broadway has ever seen, so unbearably embarrassing and tasteless that viewers will leave the theater before the very last curtain. There should be no second performance at all. But the two producers did the math without the audience: their show is understood as an ingenious farce and turns into a celebrated hit. Bialystock and Bloom are facing real problems ...