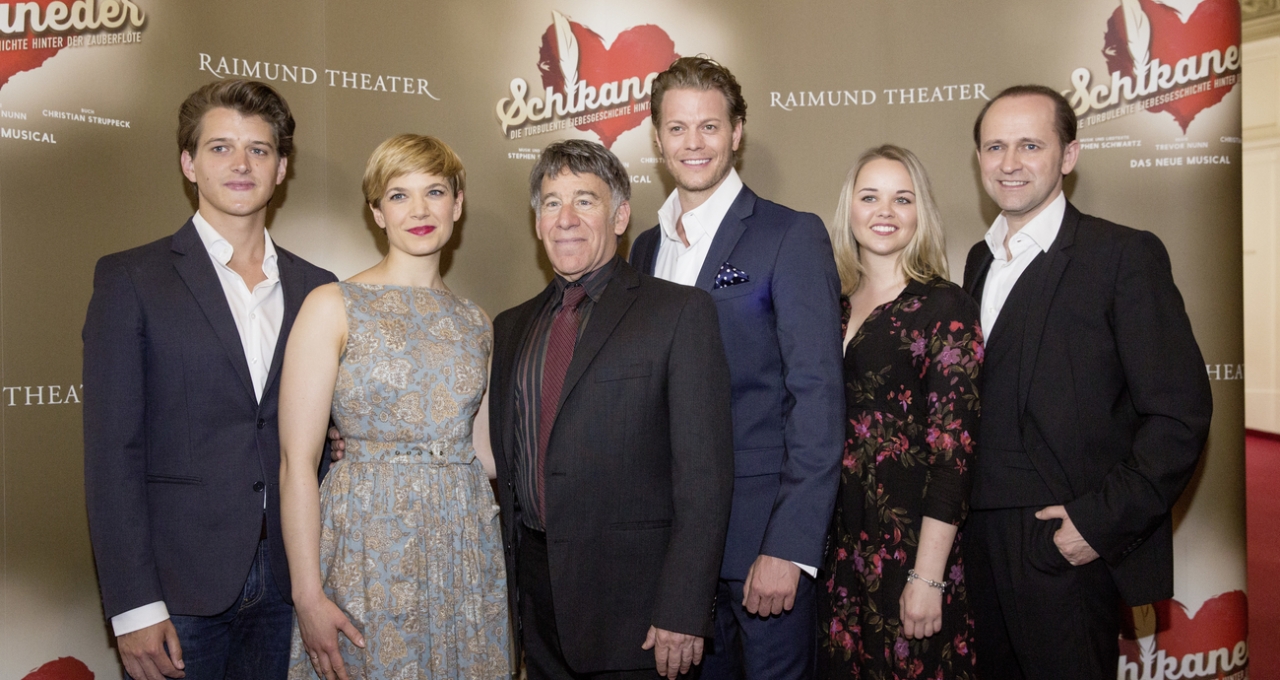 SCHIKANEDER – The Turbulent Love Story Behind The Magic Flute, a romantic musical comedy about one of the 18th century’s most colourful theatrical couples, celebrates its world premiere on 30 September 2016. It continues the VBW’s tradition of creating new in-house productions – the autumn production of SCHIKANEDER will be the Raimund Theater’s twelfth world premiere musical. Today, artistic director Christian Struppeck will present the production and the main cast in the presence of composer and lyricist Stephen Schwartz.

The VBW were able to attract an international team of acclaimed creatives from London and New York to realise this production of SCHIKANEDER.

Stephen Schwartz (music and lyrics for WICKED, THE HUNCHBACK OF NOTRE DAME, PIPPIN, POCHAHONTAS, THE PRINCE OF EGYPT, GODSPELL, ENCHANTED, among others) has won three Oscars, three Grammys and a Golden Globe. He wrote this latest VBW musical based on an aspect of Austrian history in conjunction with the VBW’s Artistic Director of Musicals Christian Struppeck (book).

The production is directed by world famous triple Tony Award-winner Sir Trevor Nunn. A former artistic director of the Royal Shakespeare Company and the National Theatre (London), he has not only directed world premieres such as CATS, LES MISÉRABLES, STARLIGHT EXPRESS, SUNSET BOULEVARD and CHESS, he is also a three-time winner of the Tony Award for Best Director. He has directed musicals, operas and straight drama, as well as major films, and is one of the most versatile and successful directors in the world.

The choreography is by Anthony van Laast (SISTER ACT and MAMMA MIA!, among others), while the set and costume design are by Tony and Olivier Award-winner Anthony Ward (OLIVER!, OKLAHOMA, MY FAIR LADY, KING LEAR and SWEENEY TODD in London and New York, among others).

The lighting design is by Paul Pyant (THE LORD OF THE RINGS and CHARLIE AND THE CHOCOLATE FACTORY, among others) and the sound design by Olivier Award-winner Gareth Owen (MEMPHIS and BEAUTY AND THE BEAST, among others). The orchestration is by David Cullen (THE PHANTOM OF THE OPERA, CATS, STARLIGHT EXPRESS, SONG & DANCE, among others).

The German translation was penned by Michael Kunze (ELISABETH, DANCE OF THE VAMPIRES, MOZART!, REBECCA, MARIE ANTOINETTE, among others).

The 31-piece Orchestra of the Vereinigte Bühnen Wien is conducted by Koen Schoots.

The VBW are delighted that for this world premiere they have been able to bring together an outstanding cast that fully lives up to the exacting standards of its international leading team. The cast line-up performing at the Raimund Theater from September 2016 onwards is as follows:

Emanuel Schikaneder will be played by the hugely popular Mark Seibert – known to audiences from numerous leading roles in major musical productions, including MOZART! (as Hieronymus Colloredo) and ELISABETH (as Death).

His wife Eleonore is Milica Jovanović (LOVE NEVER DIES, THE SOUND OF MUSIC), who played Winifred Banks in MARY POPPINS at the Ronacher until the end of January. SCHIKANEDER will be her first appearance at the Raimund Theater.

Florian Peters (MOZART!) plays Johann Friedl, while Katie Hall – familiar to London audiences from West End productions like THE PHANTOM OF THE OPERA and LES MISÉRABLES – will play Maria Anna Miller in her VBW debut. Barbara Gerl, Eleonore’s best friend, is played by Franziska Schuster (SISTER ACT, MAMMA MIA!), who appeared at the Raimund Theater as Constanze in MOZART! until the end of March.